A Memory of a Political Convention

long ago and far away

In the opinion of H. L. Mencken, who didn’t equivocate, “There is something about a national convention that makes it as fascinating as a revival or a hanging.”

I wouldn’t go that far.  In my political career, I attended conventions where serious business was done and history was made.  The conventions, after all, have a lot to say about the leadership and the direction of the country in the four years after all the balloons have been popped and all the banners have gone into the garbage. 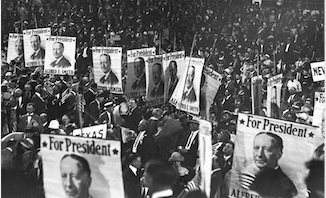 There is much about this year’s conventions that is out of the ordinary.  But, then, these are not ordinary times.  For a long time now, there has been no mystery about the nominees, for President and Vice-President, of both parties.  In the absence of suspense, one watches for what the mood of the conventions tell us about each party.

With no real drama to absorb my attention, I found myself remembering my first experience of political conventions.  It was 1948, at the Democratic party’s convention in Philadelphia.  My step-grandfather was a Democrat and a U.S. Senator from Texas.  So, of course, he was there.

I was seven years old.  My family lived in Philadelphia.  To include my grandfather, the legendary baseball figure who was known as “Connie Mack.”  He owned and managed the Philadelphia Athletics.  As a manager, he still holds the record for most career wins.

Well, the convention came to town and I found myself in adult company.  And those adults were active – to say the least – in politics.

There is one episode that is embedded in my memory and which I recount in my book Citizen Mack:

In 1948, the Democratic Party held its national convention in Philadelphia. Tom Connally, who was still in the Senate, was in town as a member of the Texas delegation, and there was a luncheon event of some sort. I was there with my parents and brothers and sisters, even though I was very young. Just seven years old. Still, I was generally pretty well behaved and was minding my manners.

But I must have gotten bored—as most kids my age would—by all the polit- ical talk, because at some point, I jumped up out of my chair and shouted, “I’m a Republican. I’m a Republican.”

A total hush fell over that room.

My grandfather looked at me sternly from across the table, pointed to a little Heathkit radio that was sitting on a windowsill, and said, very slowly, “Connie, if you keep that up, I am going to use that radio over there to call the police and have them come over and arrest you.”

I stopped and, of course, he didn’t call the cops. But I did become a Repub- lican. Eventually. And, like him, a United States senator. It was one of those odd and serendipitous little things that seem to happen in this life.

We have come to the end of May which has been designated Skin Cancer Awareness Month. I can’t let this pass for several reasons.  Not least that i am a skin cancer survivor. I was very fortunate to accomplish early detection and treatment.  My brother was not so fortunate.  He died, as a very young man, of a melanoma.  I’ve never gotten over his death.  It changed my life and was an important influence on my decision to enter politics.  In the U.S. Senate, I made the fight against cancer my abiding cause and in 1999, I was given a lifetime achievement award by the National Coalition for Cancer Research.  (Viewing the photograph is a shock.  I can’t believe I ever looked that young.)     After my time in Washington, I returned to Florida where I served, first, as Chairman of the Moffitt Cancer Center in Tampa and, then, as Chairman Emeritus.  I am now retired from both of those posts but remain keenly interested in the work of Moffitt which I like to think I helped make
Post a Comment
Read more
Speaker Newt Today is the birthday of one of the more memorable leaders and friends from my years in politics.  He engineered the Republican takeover of the House in 1994.  Something that political insiders and experts considered impossible.  But he did it and went on to lead the Republican Revolution.  His energy is boundless and as they would say in his native state of Georgia, "there is no quit in him." Here is a passage from my book Citizen Mack that might give you a sense of the man: …… there may not have been anyone in the modern history of the House of Representatives who was more committed to doing very big things than one Newton Leroy Gingrich of Georgia. His goals were simple enough: first, become the majority party, then repeal most of the work of Lyndon Johnson ’ s Great Society and a lot of Franklin Roosevelt ’ s New Deal. And, in the meantime, win the Cold War and halt the march of communism.  Senator Mack's new memoir, titled 'C
Post a Comment
Read more

Jean Kennedy Smith r i p I met with her when she was U.S. Ambassador to Ireland and I was in the country, helping to negotiate a cease fire and framework for peace between the rival factions in what were called, euphemistically, as "the troubles." Here are my recollections of that meeting, from my book Citizen Mack : When I left Belfast, I went to Dublin, where I had another experience in peaceful coexistence. I was scheduled to visit the US embassy there and spend time with the ambassador, Jean Kennedy Smith, who was, of course, a member of the Kennedy political family. It seemed unlikely, to say the least, that I—a conser- vative Republican senator from a Southern state—would be able to bond in any way with her. I expected the visit to be strained and formal and that it would seem to drag on forever. Well, the spirit of reconciliation must have been in the air. After I was introduced to the ambassador, we began a bit of awkward small talk and before
Post a Comment
Read more