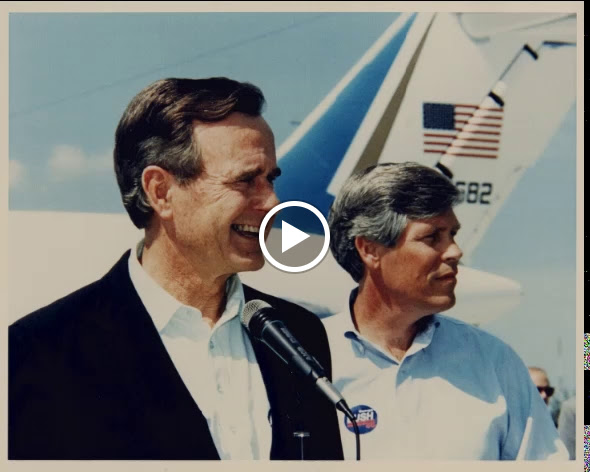 This photograph should have been posted last Friday, which was George H.W. Bush's birthday.  However, we had some technical problems so I'm putting it up late.  Just can't let it go to waste.  Not with my hair so full and free of gray.

President Bush was a patriot and a great public servant and I remember him with respect and fondness.  He makes several appearances in my book Citizen Mack.  This excerpt mentions the airplane that he said, after he had lost the election to Bill Clinton, was the thing he missed most about being President:

President [George H.W. Bush] gave me a tour,[of the new Air force One] and it was clear he loved that plane. It was too bad that he wouldn’t have much longer to enjoy the use of it.
Even President Bush seemed to sense this. On the flight down to Miami, he said to me, “You know, I think we may have waited too long to get serious with this campaign.”
I think I said something like, “Well, there is still time.”
But I wasn’t sure, and I remembered that conversation several of us had with Bob Teeter, who’d said the Bush administration planned to ride the poll numbers following Desert Storm all the way to reelection.

Citizen Mack will be available in print in early September.  You can pre-order on the home page of this blog where the digital version if available now.

We have come to the end of May which has been designated Skin Cancer Awareness Month. I can’t let this pass for several reasons.  Not least that i am a skin cancer survivor. I was very fortunate to accomplish early detection and treatment.  My brother was not so fortunate.  He died, as a very young man, of a melanoma.  I’ve never gotten over his death.  It changed my life and was an important influence on my decision to enter politics.  In the U.S. Senate, I made the fight against cancer my abiding cause and in 1999, I was given a lifetime achievement award by the National Coalition for Cancer Research.  (Viewing the photograph is a shock.  I can’t believe I ever looked that young.)     After my time in Washington, I returned to Florida where I served, first, as Chairman of the Moffitt Cancer Center in Tampa and, then, as Chairman Emeritus.  I am now retired from both of those posts but remain keenly interested in the work of Moffitt which I like to think I helped make
Post a Comment
Read more
Speaker Newt Today is the birthday of one of the more memorable leaders and friends from my years in politics.  He engineered the Republican takeover of the House in 1994.  Something that political insiders and experts considered impossible.  But he did it and went on to lead the Republican Revolution.  His energy is boundless and as they would say in his native state of Georgia, "there is no quit in him." Here is a passage from my book Citizen Mack that might give you a sense of the man: …… there may not have been anyone in the modern history of the House of Representatives who was more committed to doing very big things than one Newton Leroy Gingrich of Georgia. His goals were simple enough: first, become the majority party, then repeal most of the work of Lyndon Johnson ’ s Great Society and a lot of Franklin Roosevelt ’ s New Deal. And, in the meantime, win the Cold War and halt the march of communism.  Senator Mack's new memoir, titled 'C
Post a Comment
Read more
Cancer Survivors this is your day Today is National Cancer Survivors Day.  There are more of “us” every year and this is certainly something to celebrate.  Though we certainly shouldn’t lose sight of the fact that there is more to do and a long way yet to go. Still, there are many good stories. And much to be grateful for. I survived a melanoma – the kind of cancer that killed my brother – because, as I write in my book, the  … cancer had been detected in time, and the treatment, which had amounted to barely more than an inconvenience, had been successful.  Even if I hadn’t been a believer in early detection and treatment before, I surely would have been now.  I became even more of a believer a few months later. I had been on a rafting trip through the Grand Canyon, having the time of my life, and when it was over and I got home, Priscilla met me at the door. Later on, she would tell me that she had rehearsed how she was going to ask me to tell her
Post a Comment
Read more